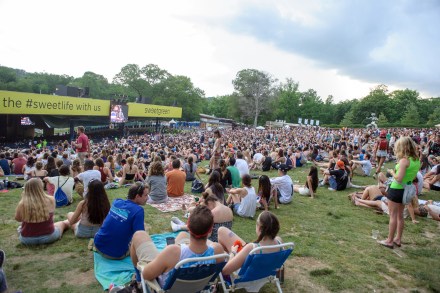 Woodstock 50 will relocate to Merriweather Post Pavilion (above), venue in Maryland outside Washington D.C. in a last-ditch effort to save the beleaguered festival.

The Woodstock 50 festival will relocate from upstate New York to Columbia, Maryland in a last-ditch effort to save the beleaguered event,Bloomberg reported. Organizers New York Times that the festival will now take place at Merriweather Post Pavilion, which is about an hour’s drive from Washington D.C. — and about four-and-a-half hours from the original Woodstock site in Bethel, New York — on August 16th through 18th.

In documents obtained by Bloomberg, Howard County Executive Calvin Ball wrote to Greg Peck, one of the Woodstock organizers: “When we heard that there was an opportunity to save this festival and bring a piece of American history to our community this summer, we jumped at the chance. Merriweather Post Pavilion in Columbia is a jewel of Howard County and one of the top music venues in the nation. It felt like such a natural fit to host a historic festival on our storied stage.”

Reps for the festival declined to comment to Rolling Stone.A rep for Ball deferred all questions to a Merriweather Post Pavilion publicist.

“Woodstock 50 approached Merriweather about hosting their event here in Columbia, Md.,” said Seth Hurwitz, chairman of I.M.P. and owner of the 9:30 Club and The Anthem and operator of Merriweather Post Pavilion. “The Woodstock folks are working on securing the artists now. If the bands come, we’ll produce the show. We’re looking forward to getting an update as soon as Woodstock 50 has one.”

It’s still unclear, however, who would actually perform at the relocated festival. The lineup initially featured a mix of original Woodstock vets like Santana, Dead & Co. and Canned Heat, and contemporary stars like Miley Cyrus and the Killers. Organizers are reportedly in conversation with artists and their representatives, though none are contractually obligated to perform at the show in Maryland.

However, early signs are not promising for the proposed lineup. John Fogerty said in a statement Thursday night that he will not be performing at Merriweather Post Pavilion. “John Fogerty knows where he will be for the Anniversary weekend of Woodstock,” his rep said in a statement. “At only one site…At the original one – the Bethel Woods Center for the Arts.”Rolling Stonehas also confirmed that Jay-Z, arguably the highest-profile act on the roster, will not be performing at the Maryland fest.

The documents also note that the festival would be renamed “Woodstock 50 Washington” and that it would primarily serve as a fundraiser for nonprofits dedicated to climate change and voter turnout. Some of the proceeds from ticket sales — which could range from $129 to $595 for various passes — would be donated to organizations like HeadCount. Organizers reportedly also circulated a marketing plan that included a mass e-mail campaign, billboards in Washington, Maryland and Virginia and full-page ads in local newspapers,Bloombergnoted.

The decision to move Woodstock 50 to Maryland comes after several tumultuous months for the festival, starting back in April when the start of ticket sales wasconspicuously pushed back. By the end of the month, the festival’s original investor, Dentsu Aegis,canceled the event, claiming organizer and original Woodstock cofounder, Michael Lang and his company Lang & Co. had not kept up their end of the bargain. The primary reason behind the cancellation: Woodstock 50 had not procured the proper permits to host the concert at a speedway in Watkins Glen, New York.

Following the cancellation, Lang scrambled to keep the festival alive even as it lost production partners and the original venue, Watkins Glen International speedway,pulled out of its contract with the organizers. Lang also filed a lawsuitagainst Aegis in an attempt to regain control over the festival. Earlier this month, Woodstock 50 tried to obtain a permit to host the festival at Vernon Downs in Vernon, New York, but that attempt was also denied.